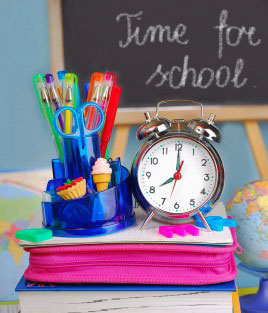 Here’s some shocking news for you.

When you go out and buy your child’s back-to-school supplies, there are no regulations controlling the plastics being used.

Most of these items are made at least in part from PVC, which contains phthalates.

Phthalates are endocrine disruptors, which are known to have significant adverse health effects on all of us, with our children being particularly susceptible.

The chemical industry has been fighting hard to persuade regulators that phthalates, BPA and other endocrine disruptors used in plastics are not a health risk, because they are found in such low doses in the plastic we buy.

This is not true.

In a landmark study published within the last few months, researchers proved that these chemicals can have a significant effect on our health, even at very low doses.

Worse still, some of the effects not only do damage to us and our children, but can endure for several generations. In other words, it’s not only our children who are being damaged by these chemicals, but their unborn children will be as well.

In a recent study, published by the Center for Health, Environment & Justice (CHEJ), it was shown that over 75% of the back-to-school supplies tested positive for elevated levels of phthalates. These items including popular Disney, Spiderman, and Dora branded items.

One product tested, the Amazing Spiderman Lunchbox, contained an estimated 27,900 parts per million (ppm) of the phthalate DEHP. If this were a children's toy, it would be over 27 times the federal safety limit.

This is a shocking reflection on how the chemical industry misleads and bullies regulators, and on how spineless those regulators are.

In the words of Dr. Sarah Janssen, senior scientist for public health at the Natural Resources Defense Council, “The FDA is out-of-step with scientific and medical research. This illustrates the need for a major overhaul of how the government protects us against dangerous chemicals.”

I agree. It is awful to consider that chemical companies and the manufacturers who use their plastics are selling back-to-school products to our children that are toxic and dangerous.

Phthalates and its toxic effects…