Some aluminum water bottles leach 5 times as much BPA as the plastic bottles they are designed to replace. 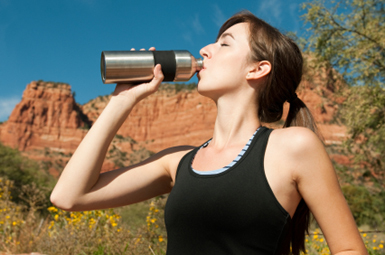 In a recent study published in the journal Chemosphere, it was found that several types and brands of aluminum water bottles were leaching BPA.

How could this be? Well, it seems that the manufacturers are lining the bottles with a resin that contains BPA. As you probably already know, BPA is widely known to be found in polycarbonate plastics. But who would expect an aluminum water bottle to be lined with a resin? And who would expect that resin to contain BPA?

As it turns out, it’s the same kind of epoxy resin used to coat the insides of canned foods. Well, we already know that these resins leach BPA, so why on earth are they being used in water bottles?

But the story gets worse. According to the study, more BPA was leaching into the water from these aluminum bottles than from the polycarbonate bottles they were meant to replace.

What does this mean to us as consumers? It means that when we try to protect our health by making a smart choice, and choosing aluminum over plastic, we end up absorbing five times the amount of BPA.

And what does this say about the companies that make these bottles, and line them with epoxy resin?

It is astonishing to me that a group of people in a company can sit down and manufacture a water bottle that is designed and marketed to be purchased by people who are concerned about BPA...and then quite deliberately increase their exposure to that chemical by a factor of five.

As consumers, we would do well never to underestimate the cynicism and greed of some of these companies.

What should you do? Well, according to a short section from the abstract of that study, “No detectable BPA contamination was observed in water stored in bottles made from Tritan™ copolyester plastic, uncoated stainless steel, or aluminium lined with EcoCare™.”

Next time you buy aluminum water bottles, take a note of those names, and be sure you don’t buy anything that contains more BPA than the plastic bottles you are replacing.

[?]Subscribe To This Site
Copyright BadPlastics.com. 2010-2016. All rights reserved.